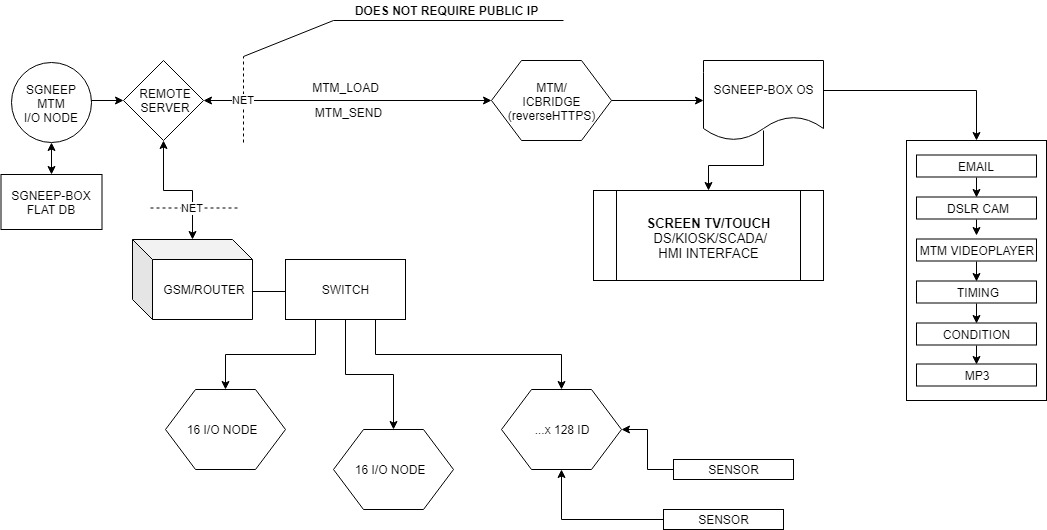 Machine to Machine (MTM) is a technology able to put different devices (machines in fact) in communication with each other, to allow machines to exchange data and information acquired in order to improve the processes performed by the machines themselves.

In the context of technological evolution, the relationship between the various actors (man, devices and software) until recently had a common denominator: man; in fact, the man who governed, directed, controlled if what the machines were doing was exactly what they were programmed for.

For some years, however, our (as a human kind) figure in many areas has increasingly less impact on the work cycle that machines perform. With the development of machines that are more and more sensitive to what is happening around them, a technological branch has developed that groups together the set of integrated system solutions that make it possible to exchange information and analyze it in a totally automatic way. part of devices that are physically interconnected with each other or within a data network: the Machine to Machine (MTM).

But what exactly does M2M mean in the real world? Although there is not yet an exact definition of the Machine to Machine, we can safely say that the M2M can be described as "the set of algorithms and procedures that allow integrated systems to perform autonomously the operations according to the automatic transfer. data from another device without any human intervention or that this may be a low or negligible percentage. "

History and origins of the machine to machine:

In the early 50s Isaac Asimov wrote and imagined in his collection 'I Robot' a world where automation was in name and in fact and the machines could talk to each other and adapt to the circumstances without there being the human intervention but Theodore Paraskevakos had to wait for the first patent of data communication over telephone lines (today's ID).

In the industrial field, an early example of MTMs took place in the automotive industry within the assembly line of cars where parts of the same section communicated the conclusion of an operation and the subsequent arrival of the piece to the next machinery. This type of communication was however monodirectional and we had to wait for the standardization of RFID (Radio-Frequency IDentification) technology or radio-frequency identification that occurred at the turn of the eighties and nineties of last century when Nokia first used the acronym MTM , in order to have some concrete examples of communication between devices.

The real breakthrough, however, took place through three main factors: the miniaturization of components, the development of common communication protocols and the data network (wireless and telephone) but above all the definition of the standards and the areas in which the M2M2 ie remote monitoring, RFID, sensor network control, intelligent services and telematics and telemetry.

Machine-to-machine technology allows the integration and dialogue of equipment (even of different types) installed at any distance between them through sensors that send (or acquire) data that are then transmitted to a central server through a network; in most cases MTM systems use wireless networks (public or private) and in more complex cases public networks with diversified access methods, such as mobile phones, ethernet or web within a closed system.

An MTM system must have at least two devices equipped with sensors, RFID, a communication link through common and shared protocols in Wi-Fi or cellular mode and an autonomous calculation software. This software is specifically programmed so that a network device can interpret the data and then make the appropriate decisions.

MTM applications acquire data, which can trigger automated embedded actions; this is particularly important in the industrial sector where remote communication between machinery and devices can operate in a coordinated way to achieve a specific goal in order to make production and the entire operating cycle more efficient.

Differences between IoT and MTM :

There are substantial differences between the Machine to Machine and the Internet of Things (IoT) technology even if the terms are improperly used interchangeably; Internet of Thing is in fact considered the evolution of the Machine to Machine, but it is substantially and formally wrong; the main difference is that while IoT needs MTM technology, MTM does not need IoT.

Formally MTM and IoT do the same thing (communication between connected devices) but while in the first one we find the single devices connected on the network in a closed system, the IoT allows to connect more M2M subsystems in a system that interacts with the environment physical (connected objects, Smart Objects) and with people.

MTM-based systems use point-to-point transmissions between devices, with sensors and dedicated hardware traveling on cellular networks or closed systems (wireless or wired), while IoT systems operate on protocol-based networks IP to send and manage data collected to specific network devices such as gateways, middleware or cloud platforms.

MTM determines how the companies (or devices) operate on a single aspect, the IoT does improve performance across multiple groups and see final results; an example of a domestic type can be that of the remote oven ignition: the MTM carries out the operation of physical ignition of the oven while the IoT system manages the phases of acceptance of the request, timing and ignition.

The IoT can therefore be composed of many MTM systems and can be defined as an evolution of the MTM where all the subjects (machines, links, man) operate to create a network for collecting and exchanging information through a set of devices equipped with sensors, Smart Objects, which communicate with each other and with human beings.